How to choose your ski boots?

The main criteria to take into account when choosing your ski boot are:

For the type of practice:

“Classic” ski boots are classified as follows, ranging from the heaviest and stiffest to the lightest and most flexible: piste // freeride (off-piste) // freerando // hiking.

Concretely, how are these criteria managed?

zUFO, thanks to its patented technology “without rigid shells” and its independent management of mechanical functions on one side and thermal insulation + waterproofing on the other allows to adapt to all morphologies.

Its Flex is mastered and depends only on one part. So by adjusting this piece or replacing it you can choose the Flex you want according to your level and your ski practice.

In addition, zUFO is designed to perform well for ski touring (lightness, detachability, high angular travel). However, zUFO’s patented technology without a plastic shell provides a rigidity that allows you to practice skiing on the slopes in a comfortable and efficient way.

Finally, zUFO is an eco-designed ski boot. Its life cycle is optimized by its modularity and its materials are chosen according to their technical and environmental performance.

How to find a ski boot adapted to your morphology?

First of all, it is necessary to specify the main parameters of the morphology of the lower leg : 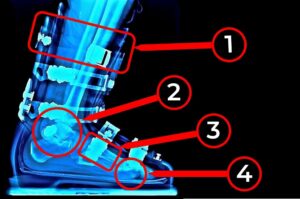 With “classic” ski boots you can opt for a width adapted to your foot (manufacturers provide, for medium / high-end boots, three different widths for a given foot length). The width at the ankle and for the calves is usually fixed. The height at the astragalus / kick too. The adjustment of the tightening of the hooks makes it possible to tighten more or less but does not allow to modify the shape of the shell to its convenience. And in any case, the technology of rigid plastic shells does not allow to choose combinations of width such as: wide foot to metatarsals / strong kick / thin ankle / strong calf.

In order to best adapt your shoes, you can call on “boot-fitting” specialists who will play on the deformation properties of the plastic by heating it. It is necessary to be accompanied by a good specialist to guarantee an improvement in comfort.

Excluding “classic” technology, zUFO, with its patented technology “without rigid shell” and its independent management of mechanical functions on one side and thermal insulation + waterproofing on the other allows to adapt to all morphologies:

How much do ski boots weigh?

With the classic technology of ski boots, it is the plastic shell that creates the structure of the boot. The more we increase the thickness of the hull, the more rigid this structure is, the more control there is but… the heavier the shoe.

For this reason, we will have heavier boots for the practice of downhill skiing than for other practices because we favor performance rather than weight.

On the other hand, we will look for lightness for hiking practices for example, the Practice Freeride and Freerando being in between.

Here is a table summarizing the weights of ski boots for each practice:

Note: weights are usually given for a size 27 (mondopoint) or 42 (Europe).

Regarding zUFO, at the time of writing (03/2022) we are in the R&D phase. The choice of materials is not yet final for all our components and the optimization of the sizing of the components is not yet realized. Our goal is a shoe with the weight of hiking shoes (1 to 1.4 kg).

What is the Flex of a ski boot?

The Flex is an index that characterizes the rigidity of a ski boot.

With the technology of “classic” ski boots it is necessary to find a compromise between comfort and control : The more flexible the boot, the more comfortable it is (the plastic shell whose shapes do not necessarily correspond to the morphology of the skier will be more malleable), the more rigid it is the less it will be subject to uncontrolled deformations that handicap control and performance.

To characterize this rigidity, manufacturers of “classic” ski boots have invented the Flex index. This index is not standardized. It follows from the judgment of each manufacturer and is not based on any tangible data. This implies that two shoes from separate manufacturers with the “same” Flex do not necessarily have the same rigidity (which the Flex is supposed to characterize).

In addition, for a given shoe, the rigidity will not be the same depending on the tightening of the hooks (tighter hooks = stiffer shoe), the outside temperature (the plastic is more malleable when the temperature rises) etc …

For the anecdote, some ski competitors bury their boots before World Cup starts to cool the plastic shell and make it stiffer! It should also be noted in passing that at the arrival of the competitions, the first reflex of the majority of skiers is to open their hooks …

What to remember for the Flex with “classic” ski boots:

We consider that the ski boot should be considered as a mechanical object, in the sense that its main function is to transmit the efforts between the body and the ski (in both directions).

For this reason, we have made the mechanical function of the ski boot independent of the other functions it must perform (thermal insulation and waterproofing), according to patented technology.

The mechanical behavior of zUFO depends only on one part that can be adjusted or replaced by another part according to its skiing practice and the transmission characteristics of the body / ski forces that one wants to obtain.

The “Flex” or rather the mechanical behavior of zUFO will be measurable in a tangible way and will not depend on external parameters (it will therefore remain constant).

What is the size chart of ski boots?

Here is the conversion table that gives the equivalences of ski boot sizes according to the country:

MP stands for Mondopoint. It is a standard (ISO 9407) defined in 1991 to avoid problems of interpretation of shoe sizes. It is mainly used in the field of professional boots (safety) and also for ski boots that address an international market.

The MP corresponds to the length of the foot in millimeters.

You can find out more about which cookies we are using or switch them off in settings.

This website uses cookies so that we can provide you with the best user experience possible. Cookie information is stored in your browser and performs functions such as recognising you when you return to our website and helping our team to understand which sections of the website you find most interesting and useful.

Strictly Necessary Cookie should be enabled at all times so that we can save your preferences for cookie settings.

If you disable this cookie, we will not be able to save your preferences. This means that every time you visit this website you will need to enable or disable cookies again.